David with the head of Goliath, Caravaggio 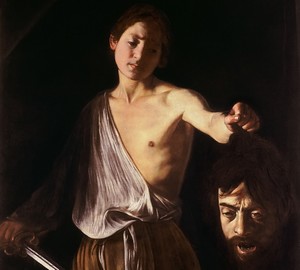 The powerful, unrestrained temperament that manifested itself in the works of Caravaggio has repeatedly disturbed him in his life. “…On Campo Marzio Square, an investigator in the Roman Curia for criminal cases reported in 1606, there was a serious quarrel between four men on each side. One leader was Ranuchcho da Terni, who died after a long struggle; the other side was led by Michelangelo da Caravaggio, a painter well known today, who is said to have received a wound, but his whereabouts are unknown. (…) The incident caused a quarrel over the 10 scarcities that the deceased won against the painter. ”. Caravaggio was sentenced to death in absentia and fled to Naples, and then to Malta. There, towards the end of his life, he painted a picture depicting a shepherd David with the head of the giant Goliath defeated by him.

From thick darkness a young man appears who holds his head chopped off in his hand. It is believed that the face of the giant is an autoportet of the artist. To a similar reception – to place your own image in a dramatic context – the painter’s namesake, Michelangelo Buonarroti, resorted to creating the “Past Judgment” fresco in the Sistine Chapel: the artist’s head was sealed on the skin torn from St. Barfolomei.

Caravaggio reinforced the feeling of bitter sadness that comes from his picture by the fact that the image of David was unusually decided: the winner himself looks defeated, with suffering looking at the act of his hands.