David with the head of Goliath, Guido Reni, 1605 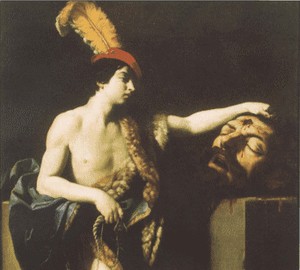 David with the head of Goliath – Guido Reni. 1605. Oil on canvas. 222×147
The artist of the Bologna school, where academicism flourished, Guido Reni (1575-1642) was also influenced by Caravaggio. He accepted the master’s conviction that art should be as close to reality as possible, so you don’t need to be afraid to portray even unpleasant or terrible things. This synthesis of passionate, realistic painting and academic manners was embodied in Reni’s painting “David with the Head of Goliath”.

One of the features of caravaggism was the contrasting lighting that the artist uses here, but his light is not as warm as that of Caravaggio, but cold-witted. The biblical shepherd David, who defeated the giant, stands in an elegant pose, in a hat with a pen and looks at the enemy’s head with naturalistic details. The tradition of portraying David as a beautiful young man was established in Italian art in the 15th century, for example, the statue of Donatello. But the contrast between the young, flowering hero, personifying life itself, and the terrible head of the murdered giant, on which Reni’s work is built, was characteristic of the art of mannerism and academicism.