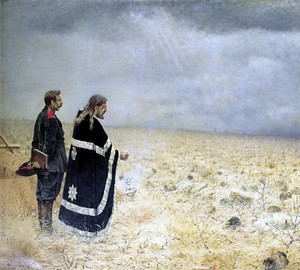 Before Vereshchagin, in art, war was demonstrated exclusively from its “paradise” side. Portraits of heroes were carried out, large-scale paintings of victorious operations were shown, in a word, her achievements were praised in every way. The great master of battle scenes managed to show us the war on the other hand. These are grief, misfortune, devastation and mass human sacrifices – many ruined lives that a military machine ruthlessly swallowed.

The picture depicts only two living people – this is a priest who serves as a memorial service for fallen soldiers, and a commander who came to say goodbye to his dead friends and soldiers. The rest of the space of the picture is a huge field that goes beyond the horizon and beyond the picture, completely covered with dead bodies. These are Russian soldiers and officers who fell in the most severe battle of Plevna during the Russian-Turkish war. With this concise technique, the artist clearly demonstrated that in any war a huge number of people die on both sides, and only a few survive.

Polotno makes a powerful emotional impression on the audience. Both artistic craftsmanship and the scale of performance are striking. The whole right part of the picture is dead, faded yellowish in color, and the bodies of the fallen practically merge with the color of the earth. This is emphasized by the fact that they no longer belong to the world of the living, but become part of the earth, dust. Many lives are destroyed simply because someone decided to fight. Here, war is clearly defined as the meaningless, stupid and cruel destruction of the most valuable – human life.

The complex theme of the picture is emphasized by the color chosen by the artist – dim, inexpressive colors, dark clothes of living people, a gloomy, lead-filled rain sky. Nature itself mourned the innocently fallen heroes of Plevna.