Diana’s return from the hunt, Rubens 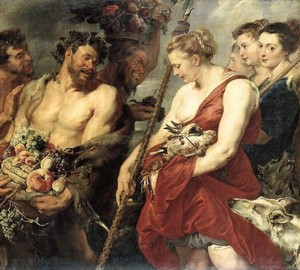 In 1608, Rubens (1577-1640), returning from Italy to Antwerp, brought with him interest in the legacy of ancient art and literature, which did not fade away in it all his life and became the cornerstone in his work and thoughts on art. He used the plots of Greek and Roman mythology for many of his paintings, especially custom ones.

The goddess Diana was extremely attracted to Rubens, because in the myth of her, another topic he loved was connected with antiquity – hunting. The interest of the painter was fueled by his royal and aristocratic cartridges: hunting was the exclusive privilege of these circles. The artist created a series of hunting paintings of a large format, many of which are based on an antique plot.

Unlike other paintings in which the master transfers the pathos of the struggle, in this canvas his attention is focused on the beauty of the ancient goddess hunter. Diana, a defender of female integrity, stands with her companions in front of a group of satiers, who, incidentally, represent a different field of interest for Rubens – everything related to bacchanalia. Diana’s spear sharply distinguishes between these two groups, two worlds. How different is the appearance of their participants: among satiers – goat-legged creatures wild in their passion, surrounded by Diana, who herself radiates the charm of female nature – her divinely beautiful companions. Satire demonstrate an abundance of fruit, hinting at what magnificent wine comes out of them in the future. In turn, Diana has birds and hare (symbols of sensory pleasures) killed by her on the hunt. In a symbolic sense, they express her denial of the proposed pleasures.

Dutch artists of the XVII century, sometimes having a narrow specialization, often attracted their colleagues when the picture needed to depict what they were not strong enough. So, the fruits and animals on the presented canvas are written by Frans Snyders, famous for similar still lifes and images of animals.