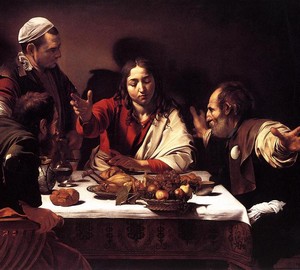 Soon after Christ was crucified and resurrected, Cleopa and his other nameless disciple went to Emmaus, a village near Jerusalem. Jesus met them along the way, He joined them, but his travelers did not recognize him. Then he stayed with them in the house, as it was already late, and having tasted food with them, the disciples recognized Jesus, but he became invisible to them.

The innovative interpretation of the plot makes this picture of Caravaggio a unique phenomenon. Christ appears in the picture to beardless, the excitement of the disciples who realized that Teacher was in front of them was expressed by their expressive gestures and facial expressions. In addition, Caravaggio makes a bright emphasis on still life, which has a symbolic meaning. Many attempts have been made to uncover it. A chicken on a plate is interpreted as a symbol of death, black grapes also point to it, and white is the personification of the Resurrection. Another symbol of the Resurrection is grenades. Apples in the system of meanings are “read” in two ways: both as fruits of grace, and as an indication of the original sin, redeemed by the blood of Christ. It is noteworthy that in reality in the spring, when the plot was activated, such fruits could not be on the table. This only proves their symbolic meaning.

The painting “Dinner at Emmaus” was written for the Roman aristocrat and banker Chiriako Mattei. For work on January 7, 1602, Caravaggio received 150 crowns. Later, the work was acquired by Cardinal Scipio Borghese.