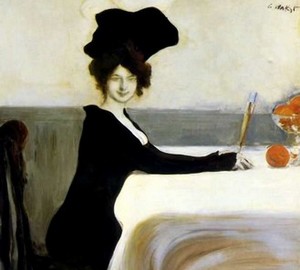 Dinner – Lev Samoilovich Bakst. Oil on canvas. 150 x 100 cm
The master, who worked at the beginning of the twentieth century, Lev Samoilovich Bakst (real name is Rosenberg) entered the history of Russian art as a theater artist rather than a machine tool. Having completed several dozen performances for the “Russian Seasons” S. P. Deagilev in Paris, Bakst gave the theater and decoration his independent sound on stage. The extravaganza of colors and the luxury of costumes created by the artist made the French press exclaim in the 1900-1910s: “The Paris was truly drunk by Bakstom!”

The master’s easel work is mainly devoted to the genre of portrait and captures the circle of close and familiar artists. The work “Dinner” depicts the wife of an outstanding artist, critic and founder of the association “World of Art” A. N. Benoit – Anna Karlovna Kind (named by family and friends just Atia).

Silueness and emphasized graphicality of lines, contrast of the white interior, black outfit of a young woman and red accents on hair and oranges create a style of the beginning of the twentieth century. The fashion for the laconicism of visual aids has largely been formed thanks to the widespread and popular book graphics and advertising. Baxt has become one of the spokesmen for the tastes of his time.