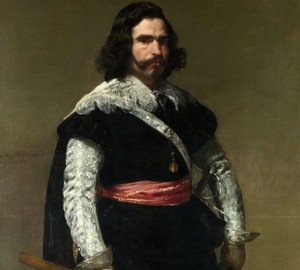 This picture is a typical ceremonial portrait of a noble Spanish grand. Don Adrian is depicted in full growth, in elegant expensive clothes richly decorated with various details. The background of the picture is “empty” and neutral, golden-olive in color, creating a beautiful contrast between the dark clothes of a noble Spaniard and the bright white details of his wardrobe. Interestingly, the artist added a shadow that the character throws. This immediately eliminates the static “plane” of the canvas, giving the picture volume and space, filling it with air.

The portrait stands slightly three quarters to the audience, holding a large dark hat in one hand, and a brown cylindrical object in the other. His hands are tightened into thin laiac gloves of light olive tone with wide ribs, abundantly decorated with embroidery in tone.

With the exception of the visible from under dark clothes of the sleeves of silver camisole, a white collar and lace finish at the edge of the stocking, the entire grand outfit is made in very dark colors, mostly black. Against this saturated background, details such as a light silk tape over the shoulder with numerous details and a fiery red, a sash flaming on a dark background that pulls the waist of a man stand out perfectly. Dark matte stockings and shoes without bright noticeable finish complement the outfit.

Pulido Pareha is a middle-aged man, sufficiently handsome and slender, with black lush and curly hair almost to the shoulders. He has a rather thick mustache, passing into the whiskers, and a characteristic Spanish beard is an espagnolka. His expression is severe, his lips are compressed, and his eyes drown in the shadow cast by overhanging black eyebrows. In general, a man gives the impression of a strong, powerful, highly positioned person with the habit of commanding and easily managing human destinies.