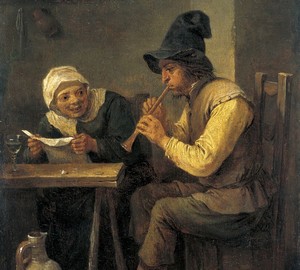 Duet – David Tenirs the Younger. The beginning of the 1640s. Oil on canvas. 24.7×19.5
The Tenirs picture, created in the early 1640s, can be interpreted as a love duet of a young peasant performing a song, and a young man playing on a pipe. Since ancient times, singing and music have been considered love symbols, as evidenced by the motto of the emblem “Amor docet Musicam” (“Love teaches music”). The grab for this emblem, created by Crispen de Pass (1523-1591), was distributed at the beginning of the XVII century. The emblem became especially popular after its publication in Gabriel Rollenhagen’s book Nucleus Emblematum, published in 1611 in Cologne.

On the emblem, the central place is occupied by the amur with a lute, depicted against the backdrop of a landscape with buildings (left) and musicating women and two men (right). In the ermitage picture, the scene is translated into a genre channel and presented in everyday terms, where there is no place for the figure of the emur. Thus, Tenirs has an old emblem and has gained a realistic interpretation. Along with this, a young man playing on the tune and a singing girl personify the allegory of Hearing, as well as a musician in the painting “Flute player”.