“Draka”, Adrian van Ostade – a description of the picture 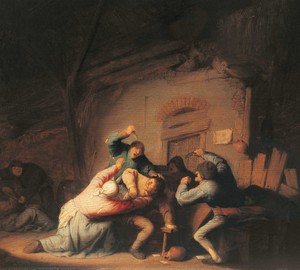 The Dutch painter Adrian van Ostade can be considered the founder of the peasant genre. After all, he, unlike other artists of the 17th century, preferred to draw not rich inhabitants and important aristocrats, but everyday pictures from the life of a simple people – villagers, shopkeepers, players, artisans, sometimes people from the bottom – drunkards, bullies, smokers and brawlers. From his works you can learn and understand the mores of the commoners of that time.

So, in 1635 he wrote a very expressive and dynamic work of “Drak”. Perhaps during this period, the young van Ostade was impressed by the paintings of the Flemish artist Braver, known for drawing revelations, scumbers, card players, cruel brawlers.

On the canvas of Adrian van Ostade we see the height of a fierce fight. Most likely, a drunk company recently got out of the tavern, they have a violent mood and a desire to “warm your fists.”. On the left side of the picture there are already victims, one goulak on the ground and they are trying to help him rise. Or maybe one of the passers-by suffered this, trying to stop the walking youths.

In the center, illuminated by a bright light spot, two hooligans with knives found their victim and pounced on her. The woman rushed to the rescue, raising her hand in a protective gesture.

The author draws these drunk people with evil, even bestial faces. The predatory profile and the hooked nose of a person on the right, with a wide knife, is especially impressive.

Due to the fact that the artist makes sharp lightnings, the characters are especially angular and sharp, unkind, even ominous, animal aggressiveness emanates from them.

The painting was written by the author in the early period of his work, but it can already be called a masterpiece in execution, in expressiveness, in liveliness and dynamism.

In subsequent years, the artist will move away from such rude and aggressive stories. For example, his “Draka”, written in 1637, only causes a good smile from the comic brawl of the villagers.