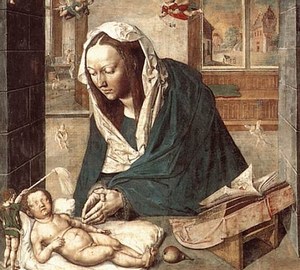 Dresden altar – Albrecht Durer. Around 1496. Wood, butter. Central panel – 117 x 96 cm, side – 114 x 45 cm
The altar marks the beginning of a mature period of Albrecht Durer’s work. In 1495, the artist arrived in Nuremberg. He was patronized by the Elector of Saxon, Friedrich the Wise. Durer created for him a number of works, among them the presented polyptych.

The plot of the central panel is the worship of the Virgin Mary the Baby. The left sash depicts St. Anthony (with a traditional attribute – a bell, although without the pig for which he was originally intended), he is calm, despite the fact that he is surrounded by all kinds of fantastic creatures that tempted him in the desert. On the right trick – Saint Sebastian. His appearance is unconventional: there are no arrows on which he was pierced, but wounds from them remained on the body (their, collarbone and abdomen). In 1495, a terrible plague epidemic broke out in Germany, which became one of the reasons for the artist’s departure to Italy. This altar with the image of a saint is a testament to its successful outcome for the artist.

In addition to the main stage, the central panel contains important story parts. So, next to the Virgin Mary, a book is placed on the spotlight. This is an allusion to the Book of the Wisdom of Solomon. Thus, it is clear that Dührer interprets Her image as “Virgo Sapientissima” (from the Latin – “Viria Premodesty”) or “Mater Sapientiae” (from the Latin – “Mother of Wisdom”). Angels hold the crown over the head of the Virgin, which indicates it as “Regina Coeli” (from the Latin – “The Queen of Heaven”, as it is called in the mystical literature of the 12th-13th centuries). In the background on the left, Joseph the carpenter works for his workbench, on the right is a view of the street and a donkey standing at the house, hinting at fleeing to Egypt.