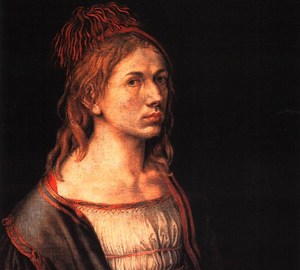 Early self-portrait – Albrecht Durer. 1493. Oil on canvas. 56.5 x 44.5 cm
Albrecht Durer became the first master of the European North to write self-portraits. Prior to this, in the medieval consciousness of people, the personality of the artist was not considered such a significant and worthy image. The new era of the Renaissance also brought a understanding of the importance of the creator.

The master portrayed himself in a light three-fourth turn to the audience, this compositional scheme was found by him in an early pencil self-portrait, created back in his youth, at the age of 13 years.

There is an assumption that this portrait was created by Dührer as a gift for his bride. A dash flower in the hand can be interpreted as a symbol of fidelity. There is another opinion according to which the inscription in the upper part of the canvas – “My affairs are determined from above”, should be considered as the motto of the artist, who believes that his life is predetermined by God’s providence. In this case, “Autoportrait” is the “illustration” of its creed, supported by the second meaning of the color of the thistle – a symbol of the suffering of Christ.