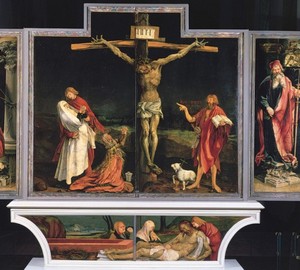 The massive fake altar – the Great Altar of Our Lady – was written by Nithardt between 1510 and 1515. for the church at the monastery in Isenheim (Elsas). The huge figure of wounded Christ on the cross emphasizes the insignificance of the mournful St. John the Apostle, the Virgin Mary and Mary Magdalene. Among the mourners on the right stands out the impassive, despite the torments and death suffered by him, figure of St. John the Baptist, urging the viewer to tune in a contemplative way and think about the sacrifice of Christ and the words attributed to him in the Bible: “He must grow, but I must be belittled” (John 3:30). On the lower panel, three Mary moan over the dead body of Christ, prepare for burial. On the wings you can see St. Sebastian and St. Anthony.

DISTRIBUTION. Jesus Christ was crucified on the mountain of Calvary (“Slaughter”) with a large flock of people, among whom were his mother and Mary Magdalene. When the soldiers crucified him, Christ said: “Father! forgive them, for they do not know what they are doing. ”. Before his death, Christ was brought a sponge soaked in vinegar. After that, one of the Roman legionnaires pierced his side with a spear and blood flowed from the wound.