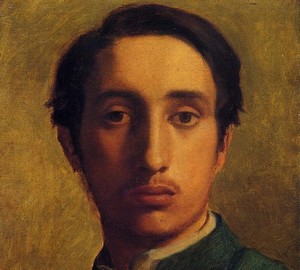 Edgar Degas (1834-1917) is perhaps the most classical of the Impressionists. He studied at the School of fine arts under the guidance of one of the disciples of the famous painter Ingres, fan art of antiquity and in the whole of classical painting. The teacher had to Degas a large impact one way or another he has carried through his entire career. After School, Degas went to Italy to learn from the old masters: Bellini, Botticelli and others, copying their paintings.

In 1862, in the halls of the Louvre became acquainted with Degas, Eduard Manet, changed his life. Through him he met the future Impressionists — Monet and Renoir. Rapprochement with the Impressionists marked the beginning of a new stage in creativity of the artist. However, previous training is still made itself felt. If the Impressionists considered the most important principle to paint from nature, to Degas is not the case. He liked to repeat, that should be “seen not drawing and draw without looking”. Degas did not approve of the desire of the Impressionists to work in the open air. Generally, he with them was not so much in common. With them it brought a desire to move away from academic templates that appeal to the themes of modern life, a truthful picture moments and living life. The titles of his paintings speak for themselves: “the Lesson of dance”, “the Wounded jockey,” “the old Ironing woman”, “Jockeys before the stands”, “At the milliners”, etc.

Degas liked to portray people, especially women, but not posing in a frozen pose, and seemed to be caught off guard in their classroom, in their characteristic poses, with their inherent gestures. The theme of the ballet, the artist became interested in the 1870-ies. Depicting dancers, the artist seeks to capture them on the stage in all his glory, no, he prefers to show us the behind the scenes labor weekdays. These are pictures of the “Dancers at rehearsal” (1874?), “The dancer at the photographer” (1875), “Waiting” (1880), “Two dancers” (1898), etc.

Once in response to the question of why he so often turns to the theme of the ballet, he reluctantly responded: “they call Me the painter of dancers; don’t understand what the dancers gave me an excuse to write beautiful fabric and pass traffic”.
With the 1870-ies he became interested in the pastels that combine the qualities of painting and drawing at the same time. This technique is suited to the artistic tastes Degas, admired line. “I am a colorist by line,” he would say. The Impressionists prayed to another God color.