“Elbrus in the clouds”, Nikolay Alexandrovich Yaroshenko – overview of the painting 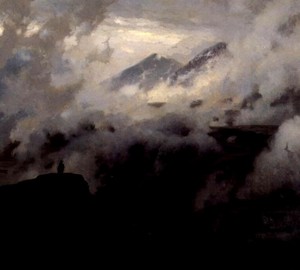 Elbrus in the clouds – Nikolay Alexandrovich Yaroshenko. Oil on canvas. 134 x 90 cm
The painting “Elbrus in the clouds” is written on the slope of the artist’s life. By that time, the Partnership of the Wanderers, to whom Yaroshenko had dedicated his life, no longer existed in its former composition, but its ideals remained unchanged.

The artist loved to portray the Caucasus: this topic can be traced in many of his works. She showed up especially clearly at the end of the tuj career path. Perhaps the mountains and rocks attracted the masters not only for their beauty, but also for their inherent unwaveringness.

It is known that Yaroshenko appreciated loyalty to ideals above other virtues, and people surrounded him not as stable in their views as he himself. Friends became strangers, fans became critics.

So, Nikolai Alexandrovich was very unhappy that Repin, who had once participated in the joint work of the Partnership, returned to the Academy. Yaroshenko, who was called the “consent” of the mobile workers, considered this a betrayal.

The mountains will not move, no matter what happens. Looking at them, the painter rested from a volatile and vain world in which there was nothing to rely on, except for his own conscience and inspired creativity.

The picture is made in gloomy tones and seems somewhat sad. The viewer is embraced by a sense of sweet sadness bordering on nostalgia. Blue gray clouds almost completely envelop the mountain range, the majestic Elbrus is visible only in the distance. The highlands are covered with all shades of green color – from salad to malachite – mixed with brown tone.

A few years before his death, the artist summed up his life. She was not cloudless or filled with joy and light. But always, both as a creator and as a person, Yaroshenko remained true to himself and unshakable. He looks like Elbrus: just as high in his morality and creative greatness.