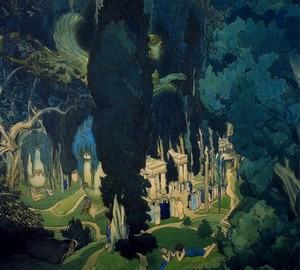 Elysium – Lev Samoilovich Bakst. Canvas, paper. 161 x 143 cm
In 1906, in St. Petersburg, the founder of the Drama Theater, Vera Commissarzhevskaya, decided to transform it in the spirit of the times. Then the combination of styles, genres and forms of art was relevant. Meyerhold was invited by the director. Poets, writers and, of course, artists were connected to the productions. Among the latter was Lev Bakst. He was entrusted with a particularly important task: to draw a curtain for the theater stage.

So theatrical decoration “Elysium” arose. The name of the picture is no coincidence: Elysium is the afterlife of the ancient Greeks, where comfort, tranquility and peace reign – the opposite of Tartarus, the underworld. The scene was decorated in Greek style, like an ancient Greek temple in honor of Dionysius. That is why Bakst chose the theme of Greek paradise for his main decoration.

The image itself is saturated with green and dark blue colors. This is done so that there is a feeling of being in the garden. There are not many people in the picture, but they all lead a carefree life: some discuss something, considering a tree, others just rest, and a couple in love have a nice conversation.

Elysium is a real ancient Greek paradise, where everyone lives without worries and hassle, where bliss reigns. The fact that this is a Greek garden is not in the slightest doubt: there are buildings with columns (like Parthenon), and people in the chitons, and statues with the image of female beauty. The author’s nostalgia for the time of antiquity lost by gold is noticeable, a reflection of the imperfection of art and the greatness of nature.

In the center of the picture you can see a mythical anthropomorphic character, which the ancient Greeks loved. This creature is with the head and hands of man, but wings like a Pegasus. The picture is painted in the style of modernism, so it is characterized by minimalism (even laconism), straight lines (especially vertical) and the integrity of forms.