“Entrance to Sevastopol Bay”, Aivazovsky – overview of the painting 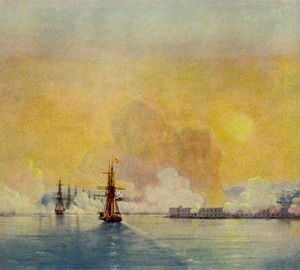 The picturesque canvas “Entrance to Sevastopol Bay” of Aivazovsky depicts the historical moment when the frigate of Nicholas I entered the bay with the aim of the highest inspection of Sevastopol and the entire Black Sea Fleet.

The composition is skillfully built: the sea seems to be competing with an absolutely clear sky, which is wrapped in smoke clubs – it salute the guns, welcoming a two-masted ship with an imperial standard, leaving behind it an arched, standing at the parade, trail on a quiet and calm sea surface.

The picture on the left shows the Konstantinovskaya battery, and on the right – Alexandrovskaya. The morning sun barely breaks through the smokescreen raised by the ceremonial volleys of coastal and ship guns.

It seems that the picture itself is highlighted on the back – brightly yellow, almost lemon-colored circles diverge from the white solar spot, and the smoke takes on the flowering of exotic plants, which would seem to have specially bloomed that day in honor of a significant event.