“Estaing on Ring B”, Alexander Deineka – overview of the painting 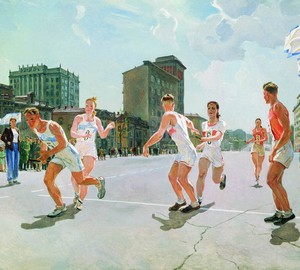 Alexander Alexandrovich Deineka is a versatile and talented artist of the Soviet period, a man of the beginning of the 20th century, who has gone from the appearance of the young country of Soviets to its heyday. Soviet people in the works of Deineka are beautiful, with high moral principles, strong, healthy, athletic, striving for victories.

Such boys and girls are depicted on one of the famous paintings of Alexander Alexandrovich, written in 1947 – “Estafeta” (at exhibitions it was held under the names “Estafeta on the Ring“ B ”or“ relay race on the Garden Ring ”).

The sports theme has always interested the artist and inspiration in this case was the annual relay race held in Moscow on the Garden Ring in the spring of 1930, with the exception of the military of the 1940s.

Deineka was preparing to create the largest work in size – he did many sketches, sketches of heroes in motion.

A beautiful, bright, spring day in the picture. A composition of boys and girls, probably the best representatives of their teams, is located in the center near the dividing line on the asphalt. Staticity in the image is not felt at all, on the contrary, the picture is full of movement and energy due to the angle – as if diagonally from the observer.

On the left and on the right are those watching the relay, just walking passers-by, curious.

According to some art experts, in the far right group of spectators the artist portrayed himself. It may well be, since by the general type and profile there is a resemblance to photographs of Deineka.

Buildings in the distance and flags with Dynamo symbols seem to frame the canvas.

The picture is good with a compositional building, light colors, “living” shadows from athletes, careful drawing of details, down to cracked asphalt. And, of course, by the feeling of a festive sporting event, a joyful mood from the spirit of competition, from youth – perky and life-affirming.