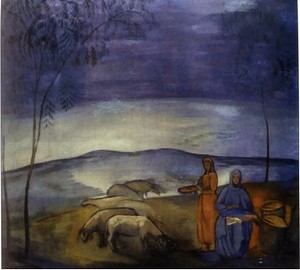 The evening in the steppe is Pavel Varfolomeevich Kuznetsov. 1912. Oil on canvas. 96.7×105.1
One of the leading masters of the Blue Rose, P. AT. Kuznetsov (1878-1968) traveled to Central Asia in 1912-1913, bringing from the trip memories of the life of the eastern peoples and work that captured much of what was seen. In the picture “Evening in the Steppe”, the artist depicted a scene from the life of Kyrgyz nomads. Women are busy with everyday affairs, sheep peacefully graze, peace and silence are spilled around.

Resting nature and man are in harmonious unity. There are no unnecessary details in the composition: only the earth, the sky, thin trees, several sheep and two female figures, shrouded in soft light; there are no specific topographic or ethnic characteristics, so the boundaries of the depicted are extended to universal proportions. The space is approaching convention, light wide strokes seem to convey its calm and even breath.