Face of war, Salvador Dali – overview of the painting 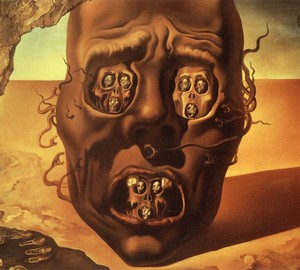 Having lost all hope for a normal life in Europe, an artist from his beloved Paris leaves for America. The war covers the Old World and seeks to seize the rest of the world. The master does not yet know that staying in the New World for eight years will make him truly famous, and his work will be masterpieces of world painting.

The painting was created on the road to the USA. Impressed by the tragedy that has erupted in the world, the bloodthirst of politicians, the master begins to work on a ship.

The artist’s manner is easily guessed in his work, his clear drawing and the way to create details, compositional features. But this time, the artist refuses the complex, intricate language of surrealism. The meaning of his work will easily be understood by every viewer, not bitten by the mysteries of other works of Dali.

Surrounded by a lifeless desert, a dead head appears in front of the viewer, skulls are placed in the eye sockets and oral cavity, in the eye sockets of which there are new skulls… And so on to infinity. Numerous snakes growing out of the head bite her own. Thus, the author tried to portray the meaninglessness of the war, its unnaturalness and destructiveness for civilization.

The compositionly picture is built in such a way that the viewer observes a terrible vision – the head – from the cave. The presence of the viewer in the work is indicated by a handprint on the stone. The viewer feels himself an integral part of the work, a participant in this mirage.

The work is filled with an atmosphere of suffering and horror. Poor color of work, muffled tones and depressive shades create a strong sound of the main idea of work. The picture was a great success for the public and became almost the only work of the master in which the artist renounces his commitment to a complex, picturesque language and an unimaginable combination of details.