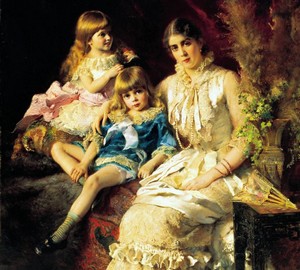 Konstantin Egorovich Makovsky is a representative of one of the most curious art clans of the XlX century. Growing up in an atmosphere of art (his father was one of the founders of the Moscow School of Painting, Sculpture and Architecture), the young man chose the path of a painter.

Konstantin Makovsky, unlike the elder brother of Vladimir, the editorial artist, presents an alternative line of painting with his work – its “salon” version. Feeling the witty problems of the time, he devoted his work to the era of Russia of the 17th century, in which he was attracted to the surroundings of painted royal chambers, the splendor of orders expanded with gold and pearls. Being, in the expression of contemporaries, “a man is an orchestra”, “bonvivan” and a dandy, Makovsky enlisted the support of the Great-Knowled society, the whole Russian wanted to be captured by the maestro brush, and members of the royal surname called him “their artist”.

In the Family Portrait, the painter depicted his wife, Julia Pavlovna Letkova, with children – Sergey (who is a famous artistic critic) and Elena (who became a sculptor and graphic artist). Makovsky, with his inherent picturesque aesthetics, tries to reward his heroes with greater attractiveness. The workshop, in which the portrait was written, fully conveys the atmosphere of luxury and the love of the owners of the house for beautiful objects.