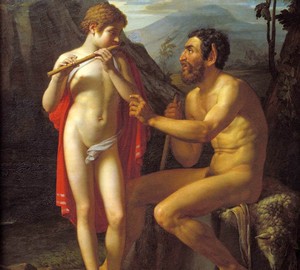 Faun Marsi teaches young man Olympia to play the flute – Petr Vasilievich Basin. 1821. Oil on canvas. 185×139.5
Petr Vasilievich Basin (1793-1877) is a bright representative of academic painting of the first half of the 19th century. A major achievement in his work was the paintings of St. Isaac’s Cathedral in St. Petersburg. The theme of easel painting was stories from ancient Greek mythology, popular in Russia of that time. The appeal to ancient history should have had a moralizing meaning that meets the objectives of art set back in the Enlightenment.

The painting “Favn Marcyus teaches young Olympia how to play the flute” is intended to tell about the dangers of pride and vanity. Athena, dissatisfied with her play on the flute, threw the instrument and cursed it. The unsuspecting faun Marcyus picked up a flute, learned the rumors that caressed hearing, and believed so much because of his talent that he was ready to fight the music with Apollo himself – the patron saint of all the arts. Having lost to his son Zeus, who played great kifar, Marcyus was punished for his daring challenge to the Olympic gods. Apollo ordered to hang him on a tree and tear his skin off him. Thus, the prediction of Athena came true, and Marcyus was punished for his vanity.