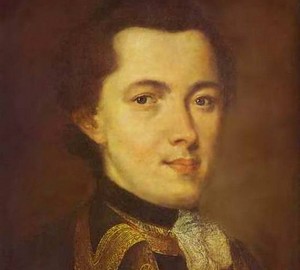 Do you remember how from the darkness of the past
Barely wrapped in satin,
A portrait of Rokotov again
Watched Struiskaya us?
These lines were written by Mykola Zabolocki portrait Struisky brush Fyodor Stepanovich Rokotov. During the creation of this masterpiece he was already established as a talented master, with his unique and recognizable handwriting. But the early years of his life hidden by the mist of past years, as the exact documentary data almost did not survive.

The future painter was born in Vorontsovo — the name of Prince Repnin. No information pointing to its origin there. However, there is speculation that he studied in the Land Gentry housing in parallel with studies at the Academy of fine arts. He retired, having reached the rank of captain, entitled to receive nobility.

The very first experiments in painting the master has determined the direction of his work — the portrait. Initially his work was quite simple and was nothing special, but its future as a great portrait painter was yet to come.

After graduation he began teaching there, and in 1763 was created so successful coronation portrait of Empress Catherine II, in her decree, all subsequent images had to rely on his work. However, even after receiving the title of academician from the artist it was not possible to continue the work of the portraitist, as this was forbidden by the Academy. Largely because of this he was forced to move to Moscow.

The Moscow period of the artist brought him a huge amount of orders and popularity. Approximately 30 master created many family portraits that Express the main features of the artist — the heightened attention to facial features and character, not the surroundings.

There is an assumption that Rokotov was part of the Masonic fraternity, and was keenly interested in political events. His own family he had, but he was able to buy nephews of chattel slavery and made them his heirs.

During the years of his work the master created many portraits, the most valuable from an artistic point of view, which were those that were particularly “rokotovskie” haze. After 80 years, this feature of his work gradually disappears, and the artist begins to pay more attention to small details and intricacies of outfits and situation.

Once in Moscow, was liquidated Masonic society, and with the fall of view of the artist, changes the coloration of his paintings. From their leaves the beauty and delicate tints, which were so characteristic of his work.

There are suggestions that in recent years the master worked with a group of students, which explains the large number of unsigned paintings in the style of the artist. As it was highly fashionable in high society, he imitated and tried to copy his original style of writing. However, the wizard left a lot of portraits, definitely confirming his authorship, and which brought him immortal fame. One of them, and, perhaps, the most famous is the portrait Struisky, amazing us with lively images of this young woman and the special atmosphere surrounding her appearance.