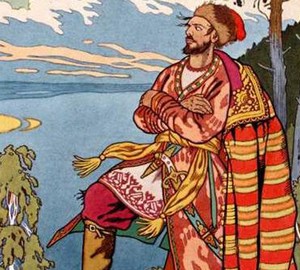 Stepan Razin – Ivan Yakovlevich Bilibin
Figure “Stepan Razin” I. I AM. Bilibina was completed tentatively in 1935. This work belongs to the late work of the artist.

The famous Don Cossack Stepan Razin is depicted in the grandiose frozen pose. A proud leader, always confident in his victory, looks around the neighborhood from a high hill.

The type of face of Razin corresponds to the author’s idea of the face of a Russian person. According to the recollections of the students, Bilibin believed that the Russian image consists of dark hair, thick eyebrows, straight with a neck of the nose, a little elongated face. In his conviction, the master referred to the studied pastures and legends.

In historical illustrations, the artist sought the accuracy of the image of details, especially folk costume. Bilibin was a passionate collector of antiquity. Bruises, wood carvings and other folk craft products served the author with visual samples when creating artwork.

Stepan Razin is wearing an embroidered cowgirl shirt, a bright embroidered zipun over his shirt and a rich caftan. The hat is finished with fur. The pants are seasoned in leather boots, behind a belt a sharp sword and dagger in carved sheaths. So, according to Bilibin, an ataman, a governor, should look like. On the shirt, the master depicted in detail embroidered animal patterns, often found in ancient robes.

The realism of the depicted landscape is given by a given perspective. The towering hill is densely covered with dark forests. The mighty river flowing below sets the depth of illustration. Disclosing the water surface, the artist uses smooth watercolor crossings: from dark blue at the foot of the hill to light blue closer to the horizon. Floating clouds and the hero’s fluttering hair add air to the drawing.

Despite the long years of living abroad, Bilibin sincerely loved his homeland, drew inspiration for his illustrations in memories of Russian nature. In each work, he sought to return to the audience the forgotten “artistic Russia”.