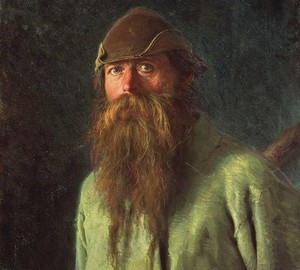 Bad, with anxiety, looks from the canvas at the viewer forester. Even posing as an artist, the hero does not part with his usual weapon – a strong club. The atmosphere of the portrait is tense.

The attention of the audience is attracted by the eyes of the hero. They have suspicion, strength, reproach. The forest conservation case is associated with a constant risk. Before us, a person who is used to counting only on himself is used to risking. He now looks ready to repel the attack.

Red, neglected beard, canvas bathrobe, circled face – all the details give us the image of a lonely person living in the forest. So could look like a fabulous flattering, forest owner. Having become a model, the hero fell into an unusual situation for himself. He does not know what to expect from the artist. Therefore, the look is frightened, and the pose is tense.

The dark background, in which the forest thicket is barely guessed, allows the viewer to see the hero without missing a single trifle. Before us is the type of Russian man from whom Razin and Pugachev formed their army.