“Flowers in the vase,” Jan Davids de Hem – description of the picture 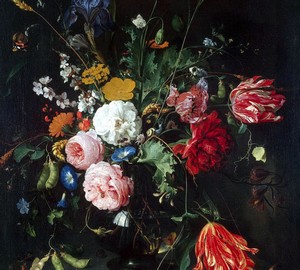 Flowers in the vase are Jan Davids de Hem. Oil on canvas. 88 x 68 cm
The picture depicts a magnificent bouquet standing in a vase on a table with a tablecloth. Art critics found about 30 different kinds of flowers on the canvas.

The flower still life genre, which appeared in the 17th century Holland, praises the beauty of nature and reflects the then popular gardening activity. Moreover, each plant has some meaning, and the bouquet thus becomes a full message.

The value of each flower can be understood from its hue. So, white flowers, as well as violets and forget-me-nots symbolize virgin purity, innocence and faith in God.

It is worth noting, however, that the red poppy, which rises somewhat above the rest of the bouquet, in this case has a positive meaning and sends the viewer to the plot of the crucifixion of Christ: there is an opinion that the poppies grew on the land irrigated by the blood of the Savior.

Another large flower in the picture – blue iris – is usually associated with the Virgin and virtue.

A pair of breadcrows symbolizes the resurrection: the grain of wheat after burial comes to a new life, just as a person after death becomes closer to God. Butterflies sitting on stems recall the immortality of the human soul.

At the bottom of the picture are withered flowers with falling petals and dried pea pods, meaning death and mortalness of life. Here – on the stems of flowers and on the table – you can see snails. Like other small animals living on and below the earth (including rats and reptiles), they symbolize the soul of a sinner, a fallen man.

Thus, in his still life, de Hem reflects two opposite sides of life: sin and virtue, landing and spiritual exaltation.