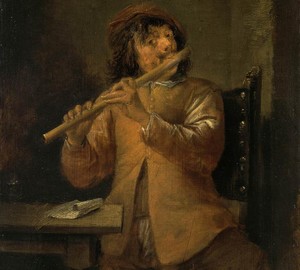 Flutist – David Tenirs the Younger. The beginning of the 1640s. Oil on canvas. 24.7×19.5
Tenirs’s work presents a enthusiastically music flutist who personifies Hearing from the Five Feel Allegory. Since the time of the Renaissance, the embodiment of Hearing in painting has been a musical instrument. However, in the Tenirs picture, the sublime allegory structure inherent in Auditus loses its original meaning and is interpreted in everyday terms. A similar interpretation of Hearing Allegoria was found in the ermitage work “Scene in a zucchini.”.

Based on the stylistic proximity with the painting by Tenirs “The Painter in His Workshop”, the painting “Flute player” should be dated to the beginning of the 1640s.