“Focusnik”, Jerome Bosch – a description of the picture 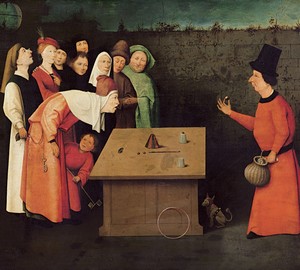 Magician – Jerome Bosch. Wood, butter. 53 x 65 cm
The painting “Focus” by Jerome Bosch depicts a group of people who are enthusiastic and surprised to follow the magician. He allegedly takes a frog from the mouth of one of the spectators.

Most people in the crowd not only observe what is happening, but are also peculiar symbols: a person in monastic clothes, who stands behind the back of an experimental, steals from his pocket wallet; a man standing next to a woman sees a hoax and points to an accomplice of a magician; the child laughs at a gullible yawn. The latter image sends the viewer to the Dutch proverb, according to which people who believe in magicians spend money in vain and become a laughing stock even for children. All this speaks of the artist’s contemptuous attitude towards the naivety of ordinary people.

Among the observers there is a character who repeatedly appears in other paintings of the artist – a man in green clothes. He looks at what is happening, but his gaze is aimed at the viewer at the same time. It is not known whether the hero has a prototype from real life, but it is worth noting that on the canvases he is usually portrayed as a negative character.

The image of the magician is even more ambiguous. Of course, such fraudulent performances have always been popular, and Bosch ridicules this phenomenon. But here is a deeper meaning.

The red clothes of the magician resembles the shape of the cardinal, and the table with its tools is the church altar. A scene with a frog extraction can also refer to the rite of exorcism. At the same time, an owl looks out of the scammer’s basket – a symbol of evil often used by Bosch.

In addition, the magician’s accomplice is dressed as a Dominican monk, and his gaze is fixed on the sky, but his act – theft – is criminal and sinful.

Thus, the picture is also a satire on corrupt priests who deceive parishioners, allegedly expelling the devil from them and cleansing them of sins.