“Following the trail,” Repin – overview of the painting 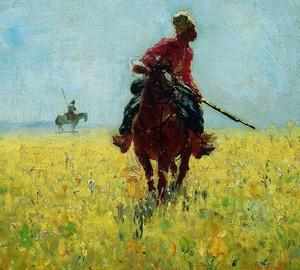 Following the trail – Ilya Efimovich Repin. 1881. Oil on canvas. 34 x 26 cm
Like many other paintings by Repin, this canvas strikes the depth of the image of space seemingly inconspicuous artistic techniques. The picture depicts two figures of the Cossacks – one in the foreground, almost in the center of the canvas, the second in its very depth, from the peering into the distance of the Cossack in a high hat.

In addition to these two figures, there is nothing else in the picture, only a faded blue sky, as if flipped by a mare or sultry haze. It has blurry clouds that brighten the horizon and give special depth and expressiveness to the image.

The lower part of the picture is an endless flat, sloping steppe, due to the burning vegetation in the sun, which seems to be covered with pale gold. It gradually passes into a bright sky, which makes the picture filled with air and space.

A distant figure is specially as if deprived of colors, he sits on a bright horse, and from bright spots only a reddish part of the clothes is noticeable. This is done specifically to focus all attention on the main element of the picture.

The central figure of the Cossack is striking in its expressiveness. He was all tense and pulled out into the string, looking for a trace lost in the grass. It has a bright outfit – a tall hat of little things, a red uniform caftan and wide dark blue harem pants. He has a very long gun in his hands – such a weapon is characterized by a very accurate battle at a great distance.