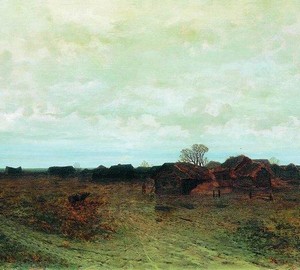 The idea of the plot arose in the painter during a trip to the south of Russia. Archip Ivanovich met many poor, as if God had forgotten villages, and this made a lasting impression on him. Being simple in himself, the master expressed in the picture of the landscape genre an exclusively civic position – even nature surrounding a handful of dark houses appears before the viewer through the prism of sympathy for a devastated village. Everything here is “breathing” with hopelessness and poverty.

Even at the preparatory stage, Quinji shared the plan of the future work with Kramsky, and he, in turn, told Repin. Evidence has been preserved that Ilya Efimovich spoke out that the idea is simply incomparable, exclaiming: “What thing he dug up!”.

Indeed, the plot of the picture was very consonant with the social and distinctive policies of the mobile workers, and Quinji deliberately sought to join an independent art society. The artist became an officially full member of the Partnership in 1875, and the Forgotten Village, along with the Chumatsky tract and Autumn Tranquility, contributed to this.

The picture draws us an uneven road that leads to a village represented by silhouettes of houses with triangular roofs. The author deliberately refused to detail – an undisturbed view of the houses should convey the abandonment of the village. This is an amazing and innovative technique.

Brown-green land, bare branches of a tree in the distance, a destroyed fence and a “heavy” sky in the curls of low gray-brown clouds hanging over a village – late bleak autumn is designed to emphasize the loneliness of this place. How does people live here on this bare earth, bathed in rains? Heavy and sad!

The painter managed to create a very tuned picture, but very soon Quinji will move away from social motives, choosing for himself another goal – to chant natural beauty!