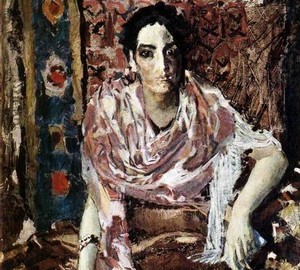 The work was created in a few hours. The master worked on a portrait of a rich customer, but at some point he refused to write a moneybags and quickly wrote “Hadal” on top of the work already begun.

Three years before writing, the artist became interested in the image of Carmen from the opera Bizet. For a long time he talked about his ideas to his colleagues, but did not start work. The model for the picture agreed to become a woman with whom the master was barely familiar.

Before the audience, undoubtedly, a Spanish woman against the background of Moorish carpets. Before the heroine, a fortunate alignment, cards portend trouble. It is no coincidence that the author depicted a peak ace in the situation. Now the burning look of the heroine becomes clear. She learned someone else’s secret, she looked into the future and herself feels uncomfortable.

The work is solved in the colors of the red spectrum. A pink heroine scarf is knocked out of the total range. In this work, usually a serene and frivolous color looks alarming and even ominous.

The work is done in the manner of the impressionists, the main thing in it becomes the impression of the master about the plot, his anxiety, feelings and premonitions.