Four philosophers, Peter Paul Rubens – a description of the picture 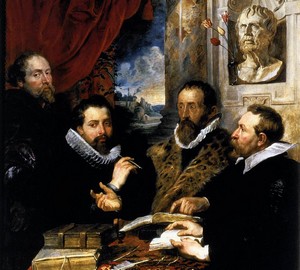 “Just Lipsy and his students” is the second name of the picture. This was a special canvas for the painter himself, because here he depicted people dear to his heart – Brother Philip, friend Jan Waverius and their teacher Yustus Lipsius.

Under the marble head of the great Seneca, the teacher Yustus is located with his favorite and best students. A little in the distance, rather not as a participant in the discussion, but as an ordinary listener, the artist himself is depicted.

The background of the picture is distinguished by pompousness and even luxury – a marble column in the niche of which is a bust, a draped bright red curtain, paint-rich landscape in the distance. At the niche, Rubens “gave tribute” to the great Roman philosopher, teacher Nero, Senec, for all four characters of the picture – we see how four tulips stand in a transparent vase.

The picture does not look like an ordinary group portrait – here every hero is individual. All surroundings, books, feathers should emphasize the high intelligence of the conversation.

Absolutely brilliantly, Rubens depicted the faces of friends. He pushed their figures to the fore, preferring to stay away. The filigree brush gave everyone its own peculiarity – the dried face of the teacher, inspired by the brother, full and thoughtful of a friend. The picture is a vivid example of the beauty and unity of the environment and the inner world.