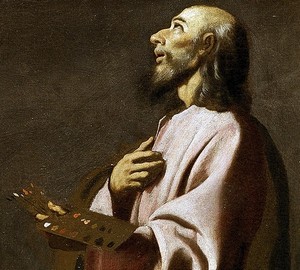 The great Spanish artist was born two years before the end of the XVI century in the province of Extremadura in the southwest of the country bordering Portugal. In textbooks of art history, he came as one of the most famous artists of the Seville school of painting, however, has its own recognizable style of writing.

Future master studied in Seville, which was then a recognized center of arts and crafts. There he met and studied with many artists in the future who gained international fame, particularly with Diego Velasquez.

After graduating from the Seville school from the local master, the future artist spent a year in the small town of Llerena from his home province (1617-1618), then returned back and settled down for the next five years.

Just a couple of years after that Zurbaran was already well known artist who specialized in Church painting. 21 it creates a picture for the Dominican monastic order. This cycle is the painting later became very famous – “Christ on the cross.”

In the next two years, from 1628 in 1630, the master wrote a cycle of paintings about Saint Pedro Nolasco and another group of creations dedicated to St. Bonaventure.

1631 the year became very significant in the life and creative career of the artist. He created a painting called “the Apotheosis of St. Thomas Aquinas”. This painting received the status of a masterpiece during the life of the artist.

The following year, Zurbaran moved to Madrid, where he became court painter. In those days this title was brought in substantial income, serious relationships and recognition from the rich and having the power of the aristocrats.

In the capital Zurbaran worked on the decoration of one of the new palaces of the king, so long diverted from the classical religious paintings. He owns ten paintings, describing the exploits of Hercules, and a masterpiece of monumental painting under the name of “defence of Cadiz”.

Like many other artists before him, on the works of Zurbaran had a great influence the legacy of the Italian Renaissance and the work of his great contemporaries. Under the influence of new issues and artistic trends of master once again settled in Seville, has created a number of famous works, which were intended for the monastery in Jerez. Of these, more than other famous paintings such as “the Annunciation”, “Nativity” and “adoration of the Magi”.

In the thirties of the XVII century the peak of fame and popularity Zurbaran. During this period, conquered the Spanish lands of South America, are actively built new churches and monasteries. They are in need of decoration paintings on religious themes. A lot of them must be ordered from Zurbaran, spreading his fame as a brilliant artist beyond the Old world. His paintings are well arranged, expressive and perfectly convey the scope and forms, the play of light and shadow.

In recent years works by the artist have time Hobbies portraits of Christ, virgin Mary and the Holy family. In these years he creates expressive children’s portraits – “Boyhood Madonna”, “Madonna and child”.

Since 1658 Zurbaran again lives in the capital. But its Golden age has passed, the work of the master, no one is interested, customers have found a more young and trendy artists. Even with the support of old friends, Diego Velazquez, Zurbaran poor and suffers from financial troubles. His life is rapidly heading to a close, and in 1664 he dies at the age of only 65 years.

In our days, grateful compatriots have not forgotten the great masters. Seville is a monument to Francisco de Zurbarán, the artist, raised painting to a new level.