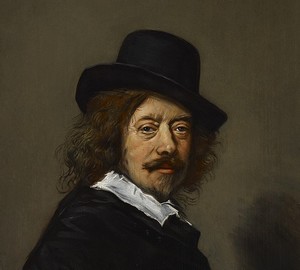 One of the most worthy representatives of Dutch Golden age painting is the artist Frans Hals. He was born in Antwerp, not exactly the prescribed year, in 1582 or 1583. This period from a historical point of view is known as a time of particularly strong persecution of Protestants from Spain. Causing the majority of the population of Antwerp fled their homes and went away into the country. So the family of a craftsman Hals van Mechelen went to the city of Haarlem, the capital of the province of North Holland.

Unfortunately, little is known about the childhood of little France. There are no facts about when he showed his talent who contributed to its development and who was the first teacher of the painter. However, by age 27 he became a member of the popular society of creative people – the Guild of St. Luke. Hulse gets the post of restorer in the local municipality.

In 1611 he married, the first child, but his wife dying in 1615. Two years later, Frans married again and lived with Lisbeth Reyners rest of my life. In their family were 11 children. Five sons followed the path of his father – became artists.

Frans Hals mostly portraits, including group. So, in 1616 he received an order from the military, wrote the magnificent company of the officers of the Guild of St George gunners and once it becomes famous and popular painter.

1620, comes the blossoming of creativity portraitist Hals. Known for his genre paintings (“from Harmen Peasants at a wedding feast”), paintings on religious subjects (“Saint Luke”, “John the Revelator”), group portraits (officers of the infantry company of Saint Adrian, and others), many normal and family portraits (e.g., of the family of Isaac Mass).

He demanded of the painter – he’s posing as ordinary people (“Gypsy woman”, “gay PAL”, “Laughing boy” and others), and high-ranking officials (the President of the court of Jasper Schade van Westrum), men of science and philosophy, for example, Rene Descartes. A portrait of this mathematician and philosopher famous for its silvery black-and-white colors, the shades of which perfectly conveyed Hulse. To 60 years Frans Hals was elected head of the Society of St. Luke, he became President of the Guild.

The artist own original writing style. It can be called the founder of future direction – impressionism. The author has no “smoothness”, it is free in the sweep of a brush and it has juicy, bright and at the same time, warm and thick paint.

But with age, painting Hals more and more begin to dominate the dark colors, black-and-white contrasts, becomes scanty and the color palette. Despite the large number of orders and annual cash assistance from the city Council, the material as it was almost on the verge of poverty. Perhaps this is due to a large family of artists. Apparently, this existence and made the items “depression” in the work of Hals.

“The man in black clothes”, “Portrait of Timana Osdorp” group painting “Regent of shelter for the elderly” and other works of the author, in which the color black predominates, though with many nuances. About which, by the way, the famous painter Vincent van Gogh in the future will say that “the Khalsa in black no less than 27 colors”.

Of course, tracing the creative path of the great Frans Hals, a very noticeable difference between his work 1620-1640 years and paintings of the late period, it is the brightness and vividness of the colors and choose life. Funny musicians, banquets officers, cheerful the girls in the first half of life. And people dressed in black, serious and gloomy, old Regents – to end of life.

Great artist died in abject poverty, in a nursing home in 1666. And forgot about it for almost 200 years. But, with the advent of interest in the Impressionists, in the 19th century his great and talented portraits and paintings have received a second birth. The work of Hals acquired by museums and private collectors around the world.