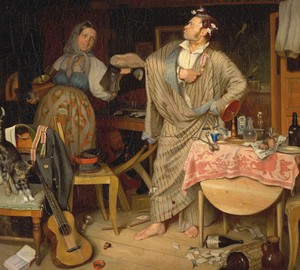 The painting “Love Cavalier” is written in the style of caricature. It has several versions of the names (“The Morning of an Official Received the First Cross” or “The Consequences of a Pirushka”). The artist talentedly and skillfully passed the genre scene from the life of a petty official. In the service he was awarded the order. Triumph raised him to such an extent that he became a proud know-it-all.

The official is depicted at dawn with papillots on his head, in a silk striped bathrobe and completely barefoot. A mess reigns in the room, things are scattered across the floor, bottles, bones from fish, fragments of broken dishes and leftover are lying under the table. The table is covered with a white tablecloth with a red ornament. It has a cup, a glass, a decanter, wine bottles, and a chopped sausage lies next to the newspaper. The military uniform sloppy hangs on a chair under which lies an open book. There is a guitar near the chair, and on it is a red cat, tearing a soft upholstery with claws.

Nearby is a maid serving him polished boots. The official stands in front of her in the position of the Roman emperor, pointing his right hand with his finger at the order, flaunting on his chest. He holds his left hand on his side, emphasizing his “superiority.”. The curlers on his head resemble the laurel wreath of a commander. He wants the girl to pay attention to him and fantasize in dreams of another life.

The maid looks at the owner with a smile. She has a nice, simple face. She is young, attractive, tidy. A gray scarf is put on her head, her hair is neatly packed in a hairstyle. The girl is dressed in village clothes: a sweater and a colorful skirt. It refers condescending to the behavior of a swagger. All this emphasizes a bright contrast between the heroes of the plot.

The picture is written in dark gray tones. She is full of irony. A official posing as a gentleman feels like a great person, despite the poverty and miserable nature of the environment. Pavel Fedotov worked on it for a long and hard time. Work was a success! The idea of the picture was brilliantly realized.