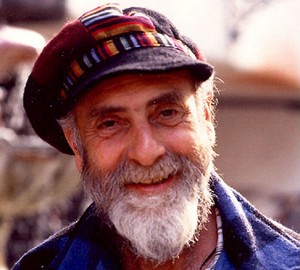 The artist with such a unique name was born in an ordinary family with mixed roots: father is Austrian and her mother is Jewish. But his personal story and talent was very difficult. Not for nothing do they say that the children of mixed marriages are different, or the incredible beauty, or a bright talent. This child was destined to be a rebel genius from the art.

Upheaval in his life began in infancy, when suddenly his father passed away. Mother with a month old baby in her arms had forced to survive on their own.

The future painter was born in 1928 and he was wearing more then the usual name – Friedrich Stowasser. When began the persecution of the Jews, the mother insisted on a Catholic baptism of a boy. The extraordinary talent he had since childhood, which was developed in the school of Montessori, where the child began to walk in 1936. Perhaps because of mother’s world and got such extraordinary artists as Hundertwasser.

After the Second World War, a young man dedicate his life to art. In 1948, he spent some time at the Academy of fine arts in Vienna. To summarize the principle of the art master can be the same declarative phrase: “In a straight line there is no God!”. He believed that the world around must not kill all human in people straight, hard lines and the deathly lifeless colors. Perhaps it manifested itself in his childhood, the newcomer to the terrible pre-war and war years.

The dull, gray monotony he hated so fiercely as the other rebel art – Antoni Gaudi. Both masters thought highly of the flowing natural lines and especially juicy and bright colors, often used in his works the motive of the spiral and infinity, a battered colored tile surround and concrete structures.

In 21 years the artist has changed his too ordinary a name to the more sonorous and original, starting from its sound and meaning. The nickname can be roughly translated as “the rich world of a hundred springs of water”. It also reflects his stance – the master believed that humanity is simply obliged to compensate the damage it causes to wildlife industrialization. Hence his fantastically painted life-affirming and bright facades of houses, buildings growing from them trees, and the famous house-a hill in New Zealand. He literally merges with the environment, and covering his grazed turf so common in this country are sheep.

During the years of his life Hundertwasser was famous as painter, graphic artist, an extraordinary decorator. He illustrated the Bible, painted the house in incredible colors, for many years taught at the Vienna Academy of arts. His talent was recognized, the master was awarded several prizes, including for the protection of nature.

The artist died in New Zealand aged 71 years, leaving fans, followers and unique in quality and properties of heritage – both material and spiritual.