“Frina at the Poseidon festival”, Semiardsky – overview of the painting 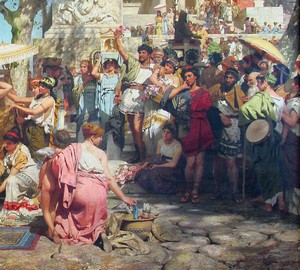 Frina with the maids (Frina at the Poseidon festival in Elevzin) – Heinrich Ippolitovich Semiardsky. Oil on canvas. 390 x 763.5 cm

Heinrich Ippolitovich Semiradsky in his work always adhered to the classical academic style of painting. His favorite topics were antique, biblical, and historical stories.

One of the masterpieces is the canvas “Frina with the Servants (“Frina at the Poseidon Festival in Elevzin”), written in 1889, in the prime of the work of Semiard.

The inspiration for the artist was the legend of the ancient Greek author about the heater Frina, who lived in the fourth century BC and was famous for her beauty and whiteness of skin.

The picture depicts a festive procession in the Greek city of Elevzin, in honor of the sea god Poseidon. Frina, confident in her own irresistibility, decides to compare with the goddess of love Aphrodite, showing her perfect, extraordinary beauty body.

To do this, during the procession, she sheds clothes and descends to the sea. The painter, as it were, divides the canvas into three parts. In the center of the geter, with its maids, who help to remove clothes and sandals, protect her skin from the burning sun with an umbrella. Frina herself dissolves her golden curls, which in a second will fall on her shoulders with a cascade.

The procession to the right, coming from the temple of Poseidon, stopped. And who enthusiastically, and who disapproves of looking at the naked Frina. The group on the left, consisting possibly of musicians, poets and just idle young people, is unanimously admired by the classically beautiful body of a Greek girl.

And this whole picture against the background of a beautifully written sea, with its overflows from turquoise to shades turning into deep blue. A powerful platinum on the shore of its foliage further emphasizes the transparency of the sky.

The painting was exhibited in St. Petersburg and was a huge success for the audience. And more than that, Emperor Alexander III immediately acquired it for 30,000 rubles .