From apartment to apartment, Vasnetsov, 1876 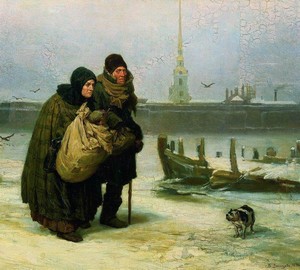 The picture is filled with hopelessness and pessimism. Gray St. Petersburg late autumn, a couple of old people roam along the embankment with their simple scarb in their hands. Judging by the clothes, we have a family of a petty official. The upcoming winter, the cost of rent, a modest pension – all this made the elderly couple look for cheaper housing. Judging by the look of the old man, carefully thrown at his wife by him, he feels guilty of what happened. The old woman is impenetrable and concentrated on the road. A faithful dog accompanies its owners, the same old, the same doomed, the same submissive fate.

The phonom are the silhouettes of the Peter and Paul Fortress, already frozen by the Neva, the skeleton of an old boat. Vasnetsov tells the viewer the route of moving the heroes: judging by the position of the Peter and Paul Cathedral, the elderly are moving from Vasilyevsky Island to a cheaper Petrograd side.

Gray sky, gray-yellow snow, protylines on the Neva, seagulls flying over the proton. A depressing landscape emphasizes the sadness of the plot.