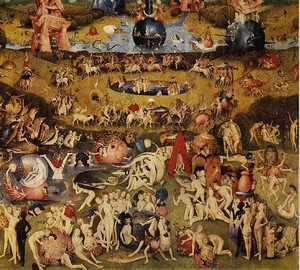 On the left triptych sash is represented by Paradise, on the right Hell, in the center is a garden of pleasures. Here, naked men and women taste the charms of life. The fancy fountain takes the long run. Medium – girls with birds and berries on their heads, swimming in the lake, around which riders move on different animals. The first plan is filled with entertaining people. A company of young people located in the bushes of the thistle is noteworthy. To their left, a young man sailing with a girl and a stork in a large bright fruit on the dark waters of the lake feeds blackberry swimmers. Immediately behind them, several large birds are depicted to the left. An interesting figure of an already middle-aged man sitting on his back leap, he lowered his head low, as if he did not want to look at the outrage happening around.

According to some researchers, in this part of the canvas, Bosch depicted people who were not yet banished from paradise, enjoying life, according to others, a world doomed to death from the flood. But none of the assumptions made is convincing.

The creation of the world and the paradise landscape is the theme of the left trick of the triptych. The center presents an elegant fountain – the source of life, on a long plane – mountains and plains inhabited by animals and birds, in the front – the Creator God connects Adam and Eve with the bonds of marriage. But, as if hinting at their upcoming sin, in the distance the master depicted a flock of birds flying out of the cave, with outlines resembling a snake.

On the right triptych trick – Hell. Houses on a long plane burn with the flame of the underworld, a fiery river carries sinners there. In the lower left corner, people are punished for their love of gambling, and among the giant tools there is a crazy concert. Probably, the author spoke out against the singing of instrumental music from the choir that was supplanted in the early 16th century in the Netherlands. On the contrary, the scene of a terrible punishment for gluttony. The key place in the composition of the sash belongs to the image of a man-tree. On his head lies a countertop and there is a bagpipes around which demons lead sinners. Some researchers tend to see the master’s self portrait in this character.

Presumably, the author wanted to convey to his contemporaries the idea that Adam and Eve, disobeying God, doomed people to eternal torment.