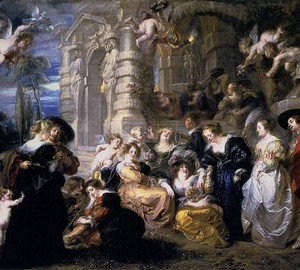 Before us is a picture of Rubens, written for himself, and not for sale. At the age of 53, the artist regains love for a very young, 16-year-old Elena Furman. After several years of widowhood, his life is again filled with joy and family harmony, despite the great difference in age with his young wife. That is why the faces of all women on the artist’s canvas resemble the face of his beloved – beautifully defined eyes, chubby lips, scarlet cheeks, magnificent forms.

The appearance of both men in the picture also resembles the earlier Rubens self-portraits – both have Spanish beards and curly hair. Despite the fact that the artist portrayed happy, peacefully resting people, it is difficult to call the picture cheerful, on the faces – the seal of some thought, reflection. The master, as if trying to stop the moment, captured himself and his young wife many times. Before us is not an ardent young man in the arms of a young beloved, but a mature, wise by life experience, and yet, incredibly happy Rubens.

To match the lovers and the surrounding landscape – the amura, pigeons flying over their heads and, on the right side of the canvas, the temple of Juno, the ancient goddess, the patroness of marriage.

The finale of the picture can be considered a man and a woman on the right, walking down the stairs – she holds the peacock feather in her hands, like the seal of a fait accompli, he is about to touch the little dog with his foot, and, having heard a screech, will lead all those gathered out of a state of languid melancholy.