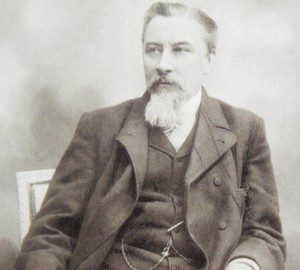 Famous artist of the second half of the 19th century Henryk Ippolitovich Siemiradzki was born in Kharkov province in 1843, in the family of a military doctor in the Royal army. Rod Semiradsky of Polish origin is quite old, in the archives, he begins to appear from the 17th century. The family adhere to the Catholic faith, Polish language and way of life.

Studying at the Kharkov school, boy gets first experience in the arts from his mentor D. I. Espartero, the famous master of genre painting academic trend. Subsequently, Genrikh Ippolitovich called him his teacher, because Aspartame classic academic style has become the main in the works Semiradsky.

Father Henry didn’t mind their son’s interest in painting, but wished him a scientific career. At the insistence of his father Henry in 1860 was admitted to a local University to study in the direction of natural Sciences. A student he is fond of insects, until the last years of his life gathers the richest collection of butterflies.

In 1864, graduating from the Kharkov University with a degree, Henry, not listening to his father, he went to St. Petersburg, where he entered the Academy of arts a volunteer. He immediately noteworthy work, written in 1865, the biblical theme of the tenth punishment for the Egyptians beating all the firstborn in Egypt. She received the first silver medal of the Academy and translations of free student students.

Because of their nature or existence of an extraordinary intellect or even, for some reason, Henry Semiradsky no friends. He enjoys music, theater, and a lot of successful draws, receives award and appreciation from the Academy. Writes Siemiradzki paintings and drawings on biblical and classical subjects, historical subjects.

He gets a gold award and the title of artist, but Henry all the time in doubt, many of his works do not like teachers, is often criticized for excessive naturalism, it is negligence to minor details.

In 1870, Siemiradzki got a still appear to friends and acquaintances. He joins the circle of St. Petersburg intelligentsia, met with M. M. Antokolsky, N. G. Rubinshteina, I. Repin and other writers, musicians, artists.

In the autumn of the same year he was awarded a gold medal and a pensioner’s trip abroad at the expense of the Academy. Being in Munich, Siemiradzki is a sketch of his first large paintings devoted to the life of Ancient Rome. The finished work is a huge success. At the exhibition in St. Petersburg it becomes the future Emperor Alexander III.

Now the artist has money and he is committed to Italy picks Rome, where he remains for many years, starting in may 1872. In 1873 he married. In Italy wrote the painting “Sinner”, “Roman landscape”, “the example of the gods,” and many others.

He produced his own style, beautiful scenery, interesting stories, the contemporaries are very fond of his paintings, despite the fact that critics still consider it the destroyer of the old academic style.

The main works in the works Semiradsky are: “Lights of Christianity,” “phryne at the festival of Poseidon”, a painting of the Temple of Christ the Savior.

In his later years he continues to work, creates a mural for Philharmonic, theatre curtain for the Krakow Opera. In 1901 he became seriously ill, and her family decided to return to Poland, to the estate Strzalkowo. In 1902 Henry Ippolitovich died and was buried in Krakow.

In times of modern and avant-garde works by the artist have been unjustly forgotten. But currently, interest in the work Semiradsky revived, they are appreciated by the audience and the connoisseurs of art.