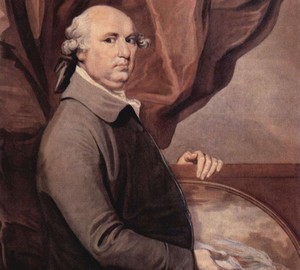 England, 18th century. The increasing popularity start to use the works of animal painters. The most famous of these is George Stubbs – a scientist, a naturalist and talented painter.

He was born in Liverpool on 25 August 1724 and could continue the father’s business, trading the skins. However inquisitive toddler more attracted to the study of bones and drawing. One of his children’s drawings of the horse was so good that one took the prize.

But only after the death of his father in 1741, he was able to do an apprentice to the painter hamlet Winstanley. At the same time, George meets with paintings by famous artists from the collection of the Earl of Derby.

The study was not specified, and a few weeks later the young man returns home, where he began to paint independently. He painted several portraits, but success does not reach.

Having decided to thoroughly study the anatomy, George in 1745, moved to York, where, under the guidance of a doctor at the local hospital takes part in the autopsies. Until we reached his earliest works were the illustrations to Dr. John Burton for childbirth. York Stubbs was awarded the title of associate Professor in the anatomy of humans and animals.

Seeking a closer study of the works of the masters of antiquity and the Renaissance, a young man in 1754 travels to Rome. This trip had a great influence on the work of a novice painter.

Returning to England in 1756, Stubbs moved to a farm in Lincolnshire. Within one and a half years working in the slaughterhouse, dissecting and sketching out the corpses of horses. At the same time a young man working on his book “the Anatomy of horses”, which will be published in 1766.

For the publication of the book needed an engraver and in his search he three years later moved to London. At this time, George finally determined with the genre of their work. Excellent knowledge of anatomy and painting skills help him become a better artist-animalist, a favorite theme of which becomes the horses.

When racing, the young man meets the owner of an excellent riding school. Drawings of horses so pleased the owner that he acquaints with him many aristocrats. The professionalism and talent of the artist, bring him a lot of orders, its popularity is growing.

It was the most fruitful period in the life of the painter. In 1762, Stubbs takes part in exhibitions of the society of artists. In addition to paintings of horses and dogs, he wrote genre scenes and group portraits. Using every the opportunity, the artist draws a variety of exotic animals brought to England.

Amazing powers of observation and accuracy, excellent knowledge of anatomy let George Stubbs to create his own style that cannot be confused with any other.

In 1770-ies painter met with the famous Josiah Wedgwood and painted several enamels on ceramic plaques for his porcelain factory, we can admire still. In 1781 Stubbs admitted to membership of the Royal Academy of arts.

In a few years, the demand for his paintings begins to fall and last years master living in poverty. He’s working on a sequel to his book on horse anatomy, but in 1806 dies of a heart attack, leaving behind a lot of drawings.

By as much as 150 years, the name George Stubbs was forgotten, until in 1957, his first work appeared at auction. Currently, his paintings occupy a worthy place among the masterpieces of world art.