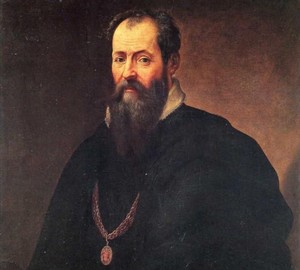 Giorgio Vasari — one of the cohort of great men of the Renaissance, “universal soldier” of the art to which the subject not only painting, but also architecture. Vasari was not only talented in this field, and in our days the General public it is better known as the author of “Biographies” – of the monumental work, which was the biography of many famous and talented people. Exact dates and details of their life are known to us thanks to the Titanic work of Vasari, who devoted almost his entire life. It can be considered the founder of art history as it is with its “light hand” and began close, on a scientific basis, the study of creative artists, graphic artists, sculptors and architects.

Vasari loved to introduce myself a native of Arezzo in Tuscany, that is why he has the nickname Aretino. There he was born in 1511 and raised. At age 11 he began to learn to paint the Church, although his father was a Potter. The proximity to Florence, then a major center of art and political life, played a role, and the young Vasari a year later began to study with the great Michelangelo, Andrea del Sarto and Bandinelli. Protection of representatives of the Medici family ended abruptly, when they had to flee from Florence, and Vasari returned to his native Arezzo. Here he had a pretty tight — the father died and the artist was compelled one to support a large family.

In Arezzo, the foundations were laid of the future “Lives”. Master Rosso actually gave the young Vasari funds to the food and a couple of useful tips, was the first artist to achieve a description of their labors and achievements in the future famous book.

Because of the siege of Florence in 1529 Vasari was forced to flee and travel around the country in search of work and a patron. He visited Pisa and other places, and then met with Ippolito de ‘ Medici, who took him to Rome. There he came the first large orders were created the painting “Venus and the Graces”, written by order of the Medici.

With the restoration of the Medici in Florence, Vasari returns to this city, where he successfully works and even teaches architecture and decoration. At this time, he writes a lot and is building decorative buildings.

Vasari’s painting is an impressive example of Tuscan mannerism. He preferred flashy multi-figure compositions, cool colors, used the services of apprentices, so that even large-scale paintings were created very quickly. To honor Vasari, he always mentioned the names of their assistants, who even preserved in the “Biography”.

In architecture he succeeded much smaller, but in that era of the titans it was quite difficult. With the restructuring of the several buildings he failed, but the construction of new buildings in their drawings showed a peculiar vision of space and individuality Vasari. Unfortunately, as an architect, he is known much less, than as the author of “Biographies”.

It was his life’s work, which has been adjusted and literary treatment even after his graduation in 1550. The book includes biographies and work of many contemporaries, Vasari and largely due to his literary feat we know so much about life and Italian art of this period.