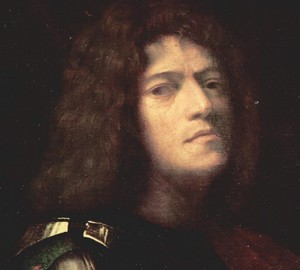 Barbarelli Giorgio da Castelfranco, nicknamed Giorgione was born in 1478. His work was highly appreciated by the descendants of Giorgione is considered one of the most significant figures in art of the era of the High Italian Renaissance. He belongs to the best representatives of the Venetian school of painting.

The biography of the artist known not completely, the information save some, even unknown exact date of his birth. Historians have established that his hometown was Castelfranco Veneto near Venice, in the name of the city and the artist got his name. As a youth, Giorgione was a pupil of the famous Giovanni Bellini in Venice. This city was then a major political and trading center. It is actively developed and supported various arts and crafts.

The first picture made by the artist independently, was the painting “Christ carrying the cross”, created in 1497. Three years later he happened to meet the great Leonardo da Vinci (according to surviving records Vasari). After 4 years he wrote “the Madonna of Castelfranco” – the altarpiece in the chapel of St. George in the Cathedral.

This is a large canvas only, written by a master for the Church. It is the only one not causing doubts about the authorship of Giorgione. All the rest of the painting can be done in collaboration with students. Also confusion in the attribution of paintings makes the fact that master is imitated and followed by many artists of the era, including such large as Titian, who, after the untimely death of Giorgione finished some of his unfinished canvases.

During his short life the artist has created several works that significantly influenced the art of that time. Among them Judith with the original interpretation of the biblical story, “the Storm”, “Three philosophers”, “Laura”, “Sleeping Venus”, “Thunderstorm”, “the Reading Madonna” and many others.

A characteristic feature of the painting by Giorgione, which he successfully adopted by other Renaissance artists, is the reverent attitude to the image of a landscape. He is not just acts as a background for figures, and is an important part of the picture itself. Landscape dedicated a lot of attention, its details are well drawn and complement the painting, make it a complete and expressive.

A characteristic feature of the paintings of Giorgione is the ultimate image clarity with perfect unity of all elements. In his works, this is achieved using the subtle play of color and chiaroscuro, so that the cloth is saturated with air and gets the amount of spatial depth.

Like all artists of this era, he used geometric motifs to create his works. They were reflected in the study of composition, use of perspective and architectural details. All of this seamlessly connects man with the surrounding space, making it a part of nature.

His paintings are filled with color and light, but they do not annoy the eyes with excessive diversity, because all colors are harmonious and do not take each other in confrontation. Paintings always look natural and delicately, even when using a large number of saturated, intense colors.

The influence of Giorgione’s painting of his contemporaries and followers cannot be overemphasized. Although he lived only about 33 years, the master had much more than other painters who have lived much longer.

The artist’s life was cut short at the end of 1510, during an epidemic of plague. The world lost a great talent that could achieve incredible heights in his work.