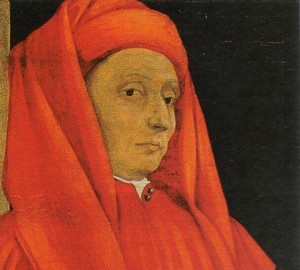 Giotto – a figure truly iconic for art around the world. With its “light hand” was a change of plane of perception, characteristic of Byzantine icon painting, three-dimensional vision. He was the founder of the Italian school of painting and is considered one of the first artists who started to use new ways of depicting space. The wizard laid the foundations of the proto-Renaissance through, and his works inspired such famous and talented artists of a later time, as Leonardo da Vinci, Raphael Santi and Michelangelo Buonarroti.

Until recently, there was controversy about the date of birth of the artist and his origin. In the writings of Vasari States that he was born in 1276 in the family of a peasant named Bondone. In another version he was born in Florence and belonged to the parish Church of Santa Maria Novella, as indicated by some documents in this city of that era. According to this story, his father was a blacksmith. Recently discovered documents confirm the date of birth of the artist in 1266, in the town of Vespignano, now bearing the name of Vicchio, near Florence.

There are many legends about how he became an artist, but they were all written after his death and bear little resemblance to real history. Also the criticism and the story of Vasari that Giotto was a pupil of Cimabue. As he wrote his “Biography” three hundred years after the death of the character it is hard to argue that his words are 100% true.

In 1301, the artist bought a house in Florence and married, which is well documented. One of the earliest known works by the master are the frescoes of the Church of St. Francis in Assisi. Since there is a very large amount of work done in about two years, it is impossible to say that they all belong to the brush of Giotto alone. Of course this was the work of a few masters, but the integrity of design and overall style of execution suggest that they worked under the guidance of the master and his plan.

One of the most famous works of the artist is the Cappella del arena at Padua, he even attributed to her the creation of the architect. It is precisely known that under his leadership painted the nave, and the paintings on the walls of the apse belongs to his school and performed for about 12-15 years later. To assert the undoubted authorship of Giotto allows documentary evidence of contemporary events.

Chapel frescoes give us an idea of how the artist was ahead of his contemporaries. They are placed in strict accordance with the geometry of space and the level of lighting. Special talent of the master was manifested in the use of composition and principles of spatial and long-term vision.

It is believed that from 1315 to 1318, the artist was at the papal Palace in Avignon, where he experienced a strong influence of the local style of painting. After his return he painted the walls of the chapel of the Peruzzi and Bardi chapels in the Church of Santa Croce (Holy cross) in Florence. Along with traditional painting al fresco (on wet plaster) technique was used in secco (dry, pre-moistened plaster). This part of the paint layer is poorly preserved.

In the last years of his life the artist was a court painter in Naples at the court of king Robert of Anjou. In 1334, he was promoted to chief architect of Florence. He and his disciples worked on the frescoes in the chapel of St. Magdalene, went to Milan for the creation of murals Azzone Visconti. Giotto died immediately after returning from this town, in 1337, he was buried in Santa Maria del Fiore. Of his eight children, two followed in the footsteps of his father, but not even close to his skill level.