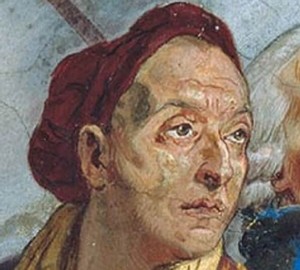 Giovanni Battista Tiepolo – the famous Italian painter, representative of the Venetian school of painting. He was born in Venice in March 1696 in a poor large family. Always loved to draw, Giovanni at a young age entered the Studio of the painter Gregorio Lazzarini, where he received the basics of decorative painting.

For 20 years, comes to him the first recognition and first orders. He quickly emerged as an accomplished artist. His first paintings “Drowning of Pharaoh” and the “Offering of Isaac” proof. Individuality, freedom, and boldness of the letters the young author’s impressive audience.

In 1717, graduating from Lazarini, he joins the local community of artists. By 1720, he happily and successfully marries the sister of Italian painter Guardi. Giovanni and Maria were born nine children, two of whom will be future artists and assistants of a famous father.

In the period from 1720 to 1725 he wrote the beautiful paintings of ancient, mythological themes, and is also a keen frescoes, received the order from the Church of the city of Venice. He’s already popular recognizable painter, and relevant orders. So, two years from 1726 to 1728, he works on painting the chapel of a wealthy Italian aristocrat.

Tiepolo is becoming known not only in his hometown, but in the other cities of Italy. In 1731 he performs extraordinary beauty and vividness of the frescoes at Milan’s Palazzo Arkinto.

From 1740 to 1750 they made a large number of works. But the most basic and important were: the painted ceiling in the Palace-the residence of the Carmelite order – Scuola dei Carmini, and the fresco in the Villa Pisani in Stra – in this “Venetian Versailles”.

Tiepolo has great performance, it does not disappear, but become more light, the real image on his frescoes. But this kind of painting is not considered easy. The artist works in the technique of “raw” murals and him before starting to work, it is necessary to present the canvas and what will be the color after drying of paints on wet plaster. Giovanni Tiepolo absolutely is not difficult to build pictorial compositions, before they are correctly positioned, dynamic, strong and free.

The fame of the Italian artist has already achieved and Europe. The apogee of the art of Tiepolo is an order from the Archbishop on fresco painting in his Würzburg residence in Germany. This whole architectural complex, built in the Baroque style. Tiepolo draws the court Church, the Kaiser hall and main staircase, on which the artist draws the world’s largest frescoes. They make up almost 650 square metres, which depicts part of the world, with their proper characters. Juicy, bright, jubilant represented on frescos of mythological heroes and fabulous creatures. Three years from 1750 to 1753 he works in Wurzburg, creating a unique masterpiece painting on the ceiling. Upon completion of the work in the residence and his return to Italy, Tiepolo was elected President of the Academy of arts.

The painter, being in old age, in 1761, obtained an order from the Spanish king Charles III to paint the ceiling in the Royal Palace. With the already grown-up sons-painters Tiepolo sent to Madrid. And again the genius of the Creator impresses the king and the Spaniards. His famous “Venus and Vulcan” and “Apotheosis of Spain” made a strong impression on his contemporaries and for centuries remained the masterpieces of fresco painting.

In March 1770 the great painter did not. Until his last days he worked, leaving dozens of sketches and sketches. To date, Giovanni Battista Tiepolo a recognized master of the Rococo style, whose works occupy an honored place in major museums around the world.