“Girls lit by the sun”, Vladimir Egorovich Makovsky – overview of the painting 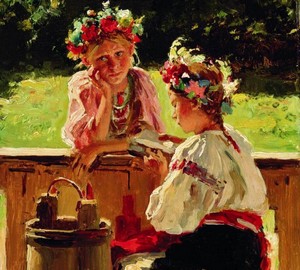 AT. E. Makovsky was a traveling artist, master of the domestic genre. He has many paintings exposing the vices of society and showing the difficult life of the peasantry.

But “Girls lit by the sun” stand out for their cheerfulness and brightness of colors from the rest of the artist’s work. Makovsky often went to Ukraine for pleners. These places conquered him with their picturesque and national color. The artist has a series of works dedicated to Malorossiya.

The picture is a small sketch. In the center of the canvas, the artist depicted two Ukrainians in national outfits with flower wreaths on their heads. Wreaths, as usual, could only wear unmarried girls.

One girl sits on her lap on the floor of the terrace of the house and reads a book. She is depicted with her back to the audience, we can see her bare feet bent under us. Next to it is a wooden bucket. Perhaps the girl sat down to take a break from homework. But this is hardly her home. Most likely, she serves local landowners. The mistress could leave the book, and the villagers found and read it.

The second girl stands on the other side of the terrace, leaning her hand against the railing. She looks directly at the viewer. Her face expresses attention and empathy of the text of the book.

Another hero of the picture is sunlight. He gently hugs the figures of the girls and brightly illuminates the green trees and the clearing in the background. The contrast is a shadow on the terrace and in the bushes behind the Ukrainians. A black spot favorably emphasizes a girlish figure illuminated by the sun. Festiveity is added to the picture by cheerful red in a flower wreath and costumes.

This small genre scene is filled with lyrics and warmth. It can be seen that the artist admires his heroines, their pure souls, youth and immediacy evoke his sympathy. Makovsky shows the rich inner world of simple villagers, not alien traction to the beautiful.