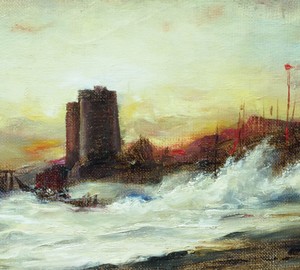 This canvas depicts the ancient symbol of the city – the Maiden’s Tower. Legends say that the tower was named after the daughter of a Shah who did not want to get married and threw down from her.

It is getting dark. Through small tears in a dense veil of clouds, the blue sky looks through. The setting sun painted the distant rocks in juicy raspberry color, in the sky above them play golden-red and lemon-yellow flashes. At dusk, only dark brown, almost black, silhouettes of coastal buildings are visible. Low ash and pink clouds come from the sea. A strong gusty wind drives high waves to the shore, tearing off snow-white foam caps from them. With deafening roar and splashes, water shafts fall ashore. Between the erupting waves make their way to the pier of the boat with fishermen who are desperately struggling with the elements.

And on the shore, the slender Maiden Tower, which has survived centuries, proudly rises. The bead lights lie on strong stone walls, which stood under the onslaught of many storms.

The artist imposes paint on the canvas in different ways: either dense, confident strokes, emphasizing the shape of the clouds and the power of the tower, then swift and chaotic, transmitting a riot of water, or with the lightest, translucent touch, creating a sense of transparency and freshness of sea air.

It uses a rich range of shades: juicy dark brown-red and purple-gray colors of buildings emphasize calm blue and lilac-gray colors of the sea and sky. Small bright orange, blue, purple spots add a picture of expressiveness and emotionality.

The picture is not limited to frames, it is filled with the wet and bitter smell of the sea, the loud noise of the waves, gusts of the wind, silver-plamutra radiance of twilight. The extraordinary ease and dynamics of work resembles the canvases of impressionists.

The painter managed to catch and capture this elusive moment when the day goes into the night, and everything around changes every minute.    And we admire the power of the formidable sea and the negligence of the sky, admire the resilience of people, and believe that everything will end well – because on the shore there is a reliable and confident tower of Maiden.