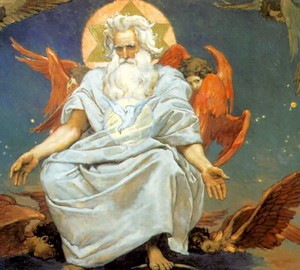 hosts is one of the names of God, whose secret sacred meaning has been lost in time. It is believed to mean “Lord of the armies of Angel,” in this sense this name is used several times in the Bible.

Obviously, in the picture, the artist plays precisely this hidden meaning of God’s name, since the central figure of hosts is surrounded by the host of seraphim, cherubim and thrones. A special structure of the composition creates a feeling of continuous movement in a circle. The figure of God placed in the center is supported by thrones with wings of a hoarse color. Their wings are directed up the diagonal, creating a continuous line with the figures of cherubim located in the upper corners of the canvas. Such placement of related figures forms the framing of the main figure, and due to placement on ascending lines, a motion effect appears.

The background gives the spatial depth to the canvas – this is an image of the sky in its cosmic interpretation. It houses stars and luminary, including immediately recognized planets – Jupiter and Saturn. All space bodies are also located in a special way – along the oval line with ends ascending to the upper corners of the picture. It also helps create image depth and movement.

The main part of the canvas is the image of a god who has a tired, lowered his hands, supported on both sides by fire seraphim. Savaof is sad, he is tired of the work of creating peace, seraphim with tenderness and love cling to his shoulders, sparing and hugging his Creator. Cherubim in sacred trepidation look at the creator of the universe. On the chest of God is the Holy Spirit in the form of a dove.

Nimbus behind the head of hosts is decorated with the six-pointed star of David – a symbol of wisdom. This can also be considered a reference to the Old Testament. Although the picture at first glance seems simple and understandable, with careful consideration you can find a multilayer subtext that is very exciting to decipher.