“Goodbye to Hector with Andromakha,” Losenko – overview of the painting 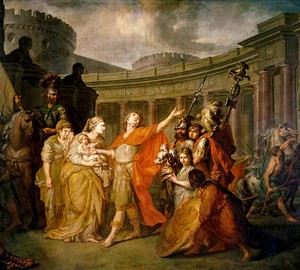 The work is based on a plot from Homer’s poem “Iliad”. In the center of the composition is the figure of the Trojan hero – Hector. He stands in a red cloak in a spectacular pose, pathetically raising his left hand up. The views, gestures, thoughts of the other characters are entirely directed towards him. Hector goes to battle, says goodbye to his family and fellow citizens. The hero is full of worries, but this does not interfere with his decision, despite the fact that he anticipates his death. Near the right is his wife Andromakha with a baby in her arms.

The founder of historical painting, Losenko does not focus on the personal experiences of heroes, but on the preaching of high civic ideals characteristic of the era of classicism. Coloring is a string of lines and concise.