Greening with a crown of thorns, Titian Vecellio 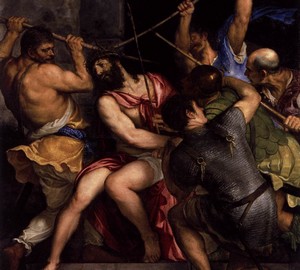 One of the scenes of Christ’s passions, Titian (1488 / 1490-1576), the greatest master of the era of the High Renaissance, depicted the emperor Tiberius against the background of the arch under a marble bust. The crown of thorns as a sign that Jesus called himself the King of Judea, occurs as if in the silent presence of the last Roman emperor, during whose reign this event happened. The marble double of all revered lords is like an impotent idol, and He who can heal human souls is humiliated, insulted and sentenced to death. The frantic and inscribed by hatred warriors attacked Him like fierce beasts, and laid the crown of thorns with sticks. The face of Christ is distorted by suffering.